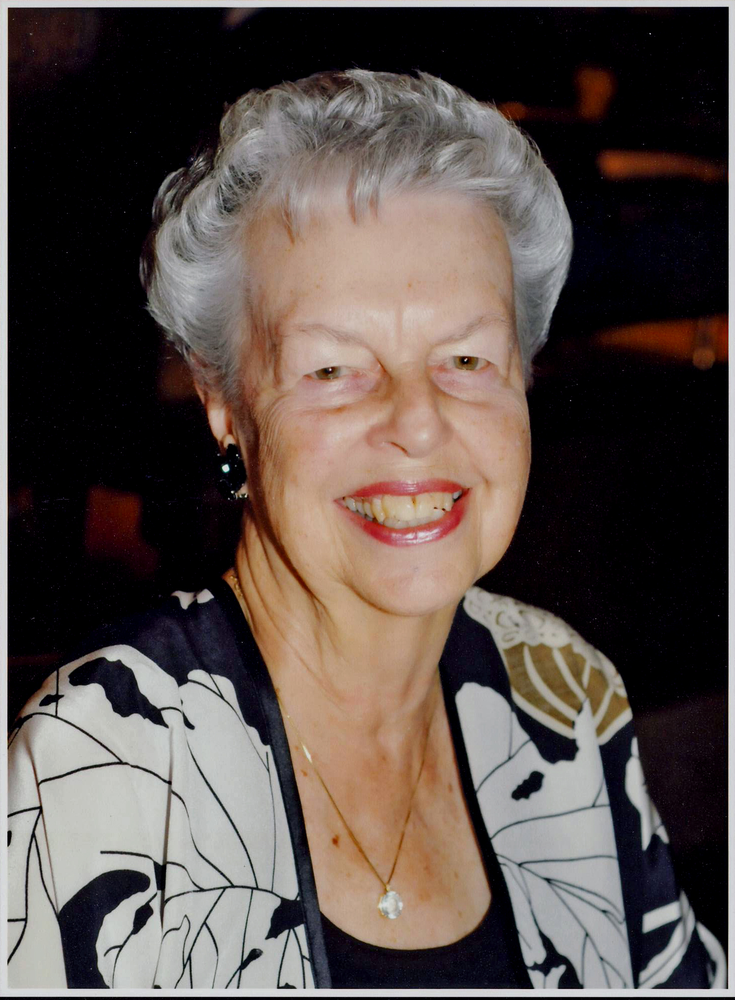 Marcia Schwalbe Fogel March 11, 1927 – May 15, 2020 If Marcia Fogel had a spirit animal, it would have been the Energizer Bunny! Throughout her 93 years, she had boundless energy, endless curiosity, and a cheerful zest for life. Born in Denver, Colorado, Marcia had an unusual childhood. With her two younger sisters, JoAnne and Cindy, she grew up in the historic Argonaut Hotel, which was owned by her parents, Henry and Thelma Schwalbe. But living in a downtown hotel had its drawbacks. Since she didn’t have a backyard, Marcia remembered crossing the street and roller skating through the marble halls of the Colorado State capitol building! And because all her meals were served in the hotel dining room, she never saw the inside of a kitchen. As a result, although she learned to appreciate fine food at an early age, she never quite mastered the art of cooking! After attending the Kent Denver School and East Denver High School, Marcia was accepted into MIT. At the last minute, she was diverted to Stanford University to make room for the GIs returning from World War II. However, when she arrived at Stanford, they didn’t know that she was coming, so she was forced to take their entrance exam. She passed and was admitted on the spot! It must have been fate, because, at Stanford, she met the love of her life, Dick Fogel. They were married in 1949 and settled in Oakland, California. While Dick worked his way up to the position of Executive Editor of the Oakland Tribune, Marcia raised three children and two Irish Setters. She also threw herself into a wide array of volunteer activities, serving as President of the Lincoln Child Center, President of the Stanford Women’s Club, Chair of the Oakland Museum Docent Council, and President of the Oakland Ballet. Where did she find the time? In 1978, Dick and Marcia partnered with Wayne Futak to found Bay City News Service, a regional newswire. As a reporter, she covered many important San Francisco stories, including fires, shootings, the visit of Pope John Paul II, the 50th anniversary of the Golden Gate Bridge, and the 1989 Loma Prieta earthquake. Additionally, Marcia served as Bay City News’ Entertainment Editor, compiling the weekly “Leisure Log,” a comprehensive listing of all the greater Bay Area arts and cultural events. She also doubled as the service’s chief drama, opera, and dance critic, writing under the pseudonym “Kimberly Miller.” Retiring in 2007, Marcia and Dick moved to University Village, Thousand Oaks. After Dick’s death in 2009, Marcia became deeply involved in the UVTO community and made many friends there. She sat on the Women’s Board, the Excursion Committee, and the LEO Club. She also served as Chair of the 2013 Budget and Finance Committee, Chair of the 2015 Resident Council, and Joint-Chair of the 2020 Capital Budget Requests Committee. Somehow, she also found time to travel abroad to England, Italy, Russia, Colombia, Panama, and Canada and spend summers at her family cabin in South Lake Tahoe. Like the Energizer Bunny, Marcia hoped to keep going and going! But on May 15, 2020 she passed away after a brief illness. She is survived by her sister Cindy Loud; her daughter Vicki Fogel Mykles (Don Mykles); her sons Rich Fogel (Marilyn Morrison) and Jonathan Fogel; three grandchildren, Rebecca Fogel (Austin Fox), Andrew Fogel (Katherine Walsh), and Christopher Mykles (Susie Kim Mykles); and one great-grandson, Maximus Mykles. She also leaves behind a towering stack of papers on her desk, which was affectionately dubbed “Mount Marcia!” Because of the pandemic, no memorial service is scheduled at this time, which is a shame because Marcia loved a good party! However, friends and family are invited to share memories and condolences on the obituary page of Fairmount Cemetery in Denver (https://tinyurl.com/marciafogel). In lieu of flowers, donations in Marcia’s name can be made to The Stanford Fund at Stanford University (makeagift.stanford.edu) or Braille Institute (brailleinstitute.org/donate).
Share Your Memory of
Marcia
Upload Your Memory View All Memories
Be the first to upload a memory!
Share A Memory