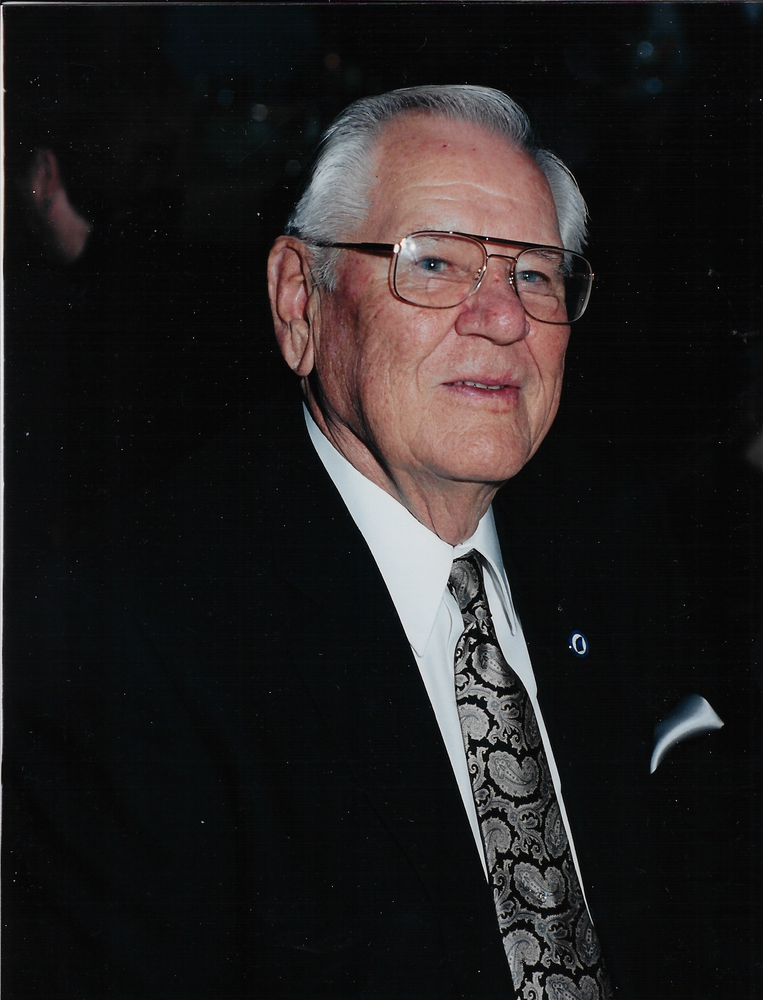 Erv is survived by his daughters Sherry Douglas and Donna (Bruce) Norman, his son Scott (Daisy), 8 grandchildren and 4 great-grandchildren.

Erv was born on February 23, 1926 in Evanston, Illinois in the family home on Main Street in which his parents Charles and Frieda Thuerk also ran a neighborhood delicatessen. The youngest of nine children, Erv grew up during the depression years learning the value of hard work and sacrifice. Upon graduation from high school in 1944, he entered the Army and served as a medical technician in the 125th EVAC mobile hospital, attaining the rank of Sergeant. His service included time in England, France, Belgium and Germany. Erv was part of a small team from his unit sent to the Dachau concentration camp upon its liberation, a day he referred to as the worst day of his life. After the war in Europe ended, Erv spent another year in Germany as part of the Army of Occupation, returning home in June 1946.

Throughout his time in the service, Erv and his girlfriend Shirley kept in touch through letters. After his return home, their relationship continued to grow and on April 19, 1947, Erv married Shirley, the love of his life. They raised 4 children, primarily in Arlington Heights, Illinois and were married 70 years before Shirley passed away in September 2017.

Erv worked for Jewel Food Stores for 29 years, retiring as Vice President of Produce in 1976. While working for Jewel, he attended school at Lake Forest College and the University of Chicago, followed by a graduate management program at Stanford University in California. He was particularly proud of being elected President and Chairman of the Board of the Produce Marketing Association and being named “Produce Marketing Man of the Year” for the entire U.S. produce industry.

After retiring from Jewel, Erv relocated to California and started his own consulting company. His 40+ years in California included residences in Westlake Village, Bakersfield, Palm Desert and Santa Clarita.

Erv most valued and enjoyed time with his family. Erv and Shirley, their four adult children, and their spouses and children gathered as often as they could even though they were located across the country. Food, laughter, games and music were common elements of their get-togethers.

Erv had a lifelong passion for music, especially Big Band music. He played clarinet and saxophone in the school bands and played in a swing band while he was in the Army. Shirley shared his love of music and loved to dance, so they pursued this interest together, including traveling to jazz festivals around the country. Their favorite jazz festival was in Sun Valley, Idaho, an annual event they attended for 20 years.

Erv and Shirley also loved to travel and were fortunate to go on many trips together. Their favorite destinations were Germany, Austria and Hawaii. Some of their travels enabled them to pursue their interest in genealogy. Over the past 30 years, Erv gathered extensive documentation and family photos, tracing his family lineage back to the early 1700s.

A private graveside service was held at Memorial Park Cemetery in Skokie, Illinois.

Share Your Memory of
Ervin
Upload Your Memory View All Memories
Be the first to upload a memory!
Share A Memory