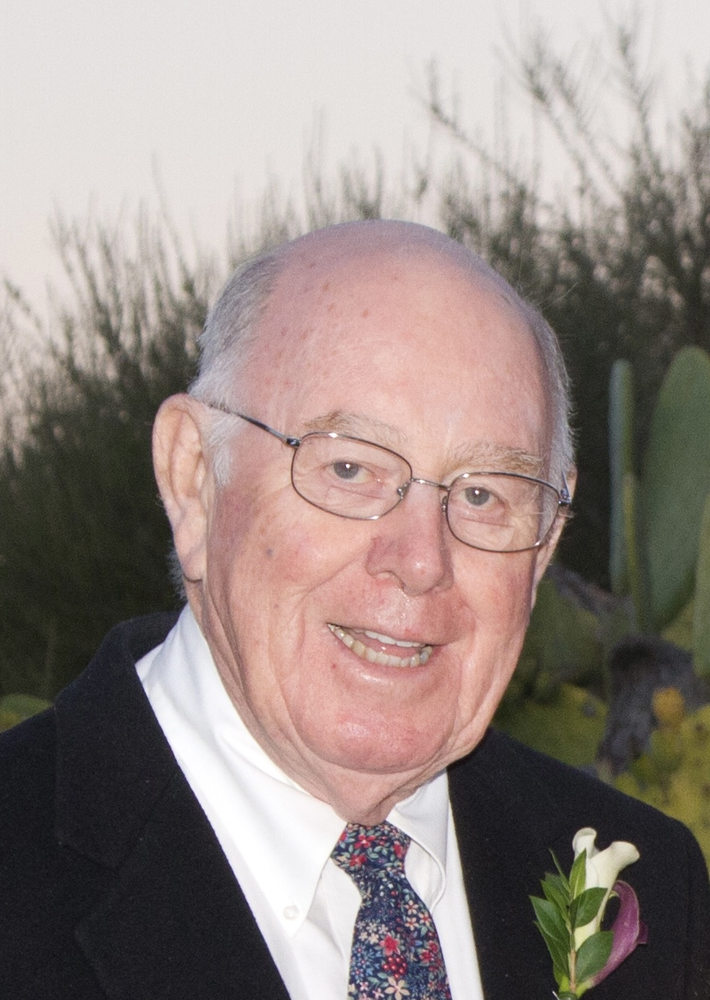 John Francis Bergin was born on October 31, 1933 in Roxbury, Massachusetts to Irish immigrants Brigid Agnes Reid and Joseph Patrick Bergin.  He proudly earned his Bachelor’s Degree in Accounting from Boston College where he was President of the Gold Key Society and recipient of the Finnegan Award, given to the student who most lived up to the school’s motto “Ever to Excel.” He served in both the US Army and Marine Corps Reserve in the 1950s.  “Jack,” as he was known by his dearest friends and family, rose through the ranks of Sears Roebuck and Company in its glory days, moving several times until settling in Chicago, Illinois, as Senior Comptroller for the corporation.  He and his wife, Eleanor “Ellie” Blanche Stoddard, were married for fifty-six years at the time of her passing.  They had retired in Osterville, Massachusetts on Cape Cod where they lived for nearly thirty years.  He is survived by their five children, John Francis Bergin Jr. (Mary) of Bradenton, FL, Kathryn Shufelt (Jeffrey) of Powell, OH, Paul Bergin (Margaret) of Inverness, IL, Colleen Amirsakis (John) of Darien, CT and Kristin Anderson (Michael) of Malibu, CA along with his beloved twelve grandchildren and five great-grandchildren.  He is also survived by his sister Maureen Nicholson (Joseph) and numerous nieces and nephews.  In addition to his wife, Eleanor, John is preceded in death by his parents “Agnes” and Joseph, his brother Joseph (Ann) and foster-brother John Shields.

Though he achieved much success in business, his most treasured and valuable achievement was his family.  It was his first and foremost priority, along with the Blessed Mother to whom he prayed.  He delighted in sharing his love of the ocean with them, relishing in the salt air.

John was known to be a man of integrity with a gritty work ethic.  Famous for his endless stories, all filled with life’s most valuable lessons, delivered with his vibrant smile and brilliant blue eyes.  Sought out for advice from young and old, coast to coast, John was a mentor to innumerable individuals.  His legacy will live on in the decisions of those he touched for generations to come.

A Visitation will be held on Monday, January 4th at 5:00pm PT.  At 5:00 a slideshow of John's life will play, followed by a visitation until 6:30.  At that time, a Rosary will begin and will end around 7:30pm.  Follow this link to join the services virtually: https://scsandche.wixsite.com/creative-memories/copy-of-livestream-sample-55

A funeral Mass will be held on Tuesday, January 5th at 10:00am PT.  Follow this link to join the services virtually: https://scsandche.wixsite.com/creative-memories/copy-of-livestream-sample-55

Please direct any questions regarding the live stream to the Rose Family Funeral Home in Simi Valley, CA. www.rosefamilyfuneralhome.com.