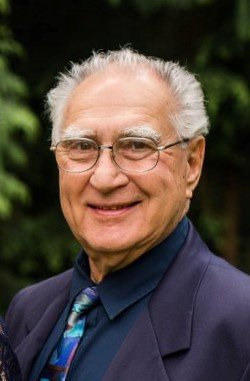 Born in San Diego to businessman George and Auda Aposhian, Edwin grew up in San Diego as the son of a businessman and Baptist pastor. Ed had a rich upbringing surrounded with Armenian Aunts and cousins who moved to America from Turkey in the early 1920’s. Ed was the youngest of 5 children and he loved Armenian food.

Ed joined the Airforce in 1955 where he met lifelong friends and was the top of class in Airborne Radio Repair. During those years he entertained his friends with playing Boogie Woogie on the piano and dancing, and fell in love with cars, especially yellow Corvettes. He left the Air Force in 1959 and bought a yellow Corvette.

His Air Force training led him to a 45-year career as an Engineer / Training Manager in aerospace as he worked with Teledyne, Litton, and Northrup Grumman. During those years he had many opportunities to travel the United States, Europe, Japan, and Taiwan with his wife Claudia. After he retired in 2002 he  had a couple other  part time fun jobs  such as the Christian Radio Station in Simi Valley.

A Significant part of Eds life was at Church of the Living Christ in Simi Valley where they raised their family and attended church for 40 years.

Then they attended Simi Hills Christian Church for about 10 years and currently attend Godspeak Calvary Chapel in Newbury Park.

A highlight of his life was camping with family and friends at Leo Carrillo State park every year since 1973. They also took many camping trips with the trailer. Ed joined the Elks #2492, Happy Wanderers Camping Club a few years ago and enjoyed the many friends they made.

He also joined the Veterans Lunch meetings several years ago and was blessed with many friends there too.

He sadly passed away from complications of Cardiopulmonary demise and Covid 19 in Simi Valley.

He will be missed by family and friends.

Share Your Memory of
Edwin
Upload Your Memory View All Memories
Be the first to upload a memory!
Share A Memory