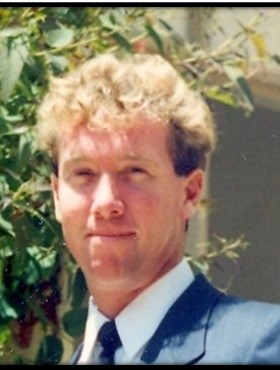 William Andrew Krachenfels aka Willie Krachenfels, 56, died on April 9, 2021 in his sleep from cardiac arrest after several years of treatments for squamous cell skin cancer that had metastasized into his lymph nodes and caused severe facial tumors.

Willie never met three of his grandparents.  His paternal grandparents died in Budapest, Hungary before he was born.  His grandfather, Vilmos András Krachenfelser, died in 1962.  His paternal grandmother, Margit Taub, died in 1944.  His maternal grandfather, Imre Illés Hegedüs, died in 1945 at or near Mauthausen Concentration Camp in Upper Austria.  His maternal grandmother to whom he was devoted, Clara Sophie Hegedus, died in 1998 in Worcester, Massachusetts.  Willie never learned or spoke Hungarian or had any interest in Hungarian culture or custom.  He was always a son of sunshine and San Fernando Valley.  His parents had each emigrated from Communist Hungary after the 1956 Hungarian Revolution and adapted to the Southern California layback lifestyle that they encouraged in their children to pursue as well..

Willie flourished at playing team and individualized sports and doing outdoor activities.  During his junior high and high school years, he was a good team player as well as a star athlete in Valley Youth Soccer League travelling with his championship team around the country.  He excelled as a surfer and skier.  He delighted in surfing the Pacific Coast beaches from Baja to Point St George. He appeared as a typical Southern California surfer in an LA Times feature on surfing at Zuma Beach in 1985.  He loved surfing Hawaii beaches while accompanying his parents on family vacations.   He loved skiing the highest peaks in California, Colorado, and Idaho.  His parents put skis on him without a single lesson at the age of nine at 15,000 feet; he never fell!  He was a natural.  Willie loved camping and hiking and was planning on taking outdoor vacation trips with his camper trailer right before his passing and planned to build a cabin on a friend’s lot near a river in Oregon soon to pursue his outdoor passions.  Willie adored his dogs; he played with them endlessly.   As a teenager, he was a budding painter of the outdoors, but his interest was discouraged by his parents.  In the last couple of years, his interest in painting had just starting to rebloom.

Willie graduated from Canoga Park High School in 1982, attended Pierce Junior College in Woodland Hills and California State University in Northbridge graduating with an Associate Degree in Natural Resources in 1988.  After college, he worked for over a decade as an Independent Contractor supervising the installation of Coaxial Cable at various new housing developments in Southern and Central California.  During the first decade of the millennia, he changed careers and worked as Account Executive for subprime mortgage lenders, identifying himself as “SubPrimeWil”.   After the global financial crisis, he became a Day Trader and later an Account Representative for cannabis supplies company.  For Willie, work was always a means to the Good Life as he viewed it without intentionally hurting another living soul.   He was a nondenominational Christian.

Willie had girlfriends but never married.  For nearly 8 years before his father’s death in 2018, Willie devoted nearly full-time to the care of his Dad who suffered from dementia.  As a friend said, “… he pretty much shut-down his own life and interests.”   Then, after his Dad died until his own death, cancer treatments limited his life.

Willie had many lifelong loyal friends who dearly loved him.  As one friend wrote, “I have been blessed to have had a friend like Willy for all these years, we got on well and I don't have a single negative memory of my friend…”  Another, “the thing I remember most about Willy is how happy and jovial he always was. Just being around him made everyone’s life more pleasant, you couldn’t help it his humor was contagious.”   Willie touched many lives and will be sorely missed.  A gentle, caring, loving soul has passed.