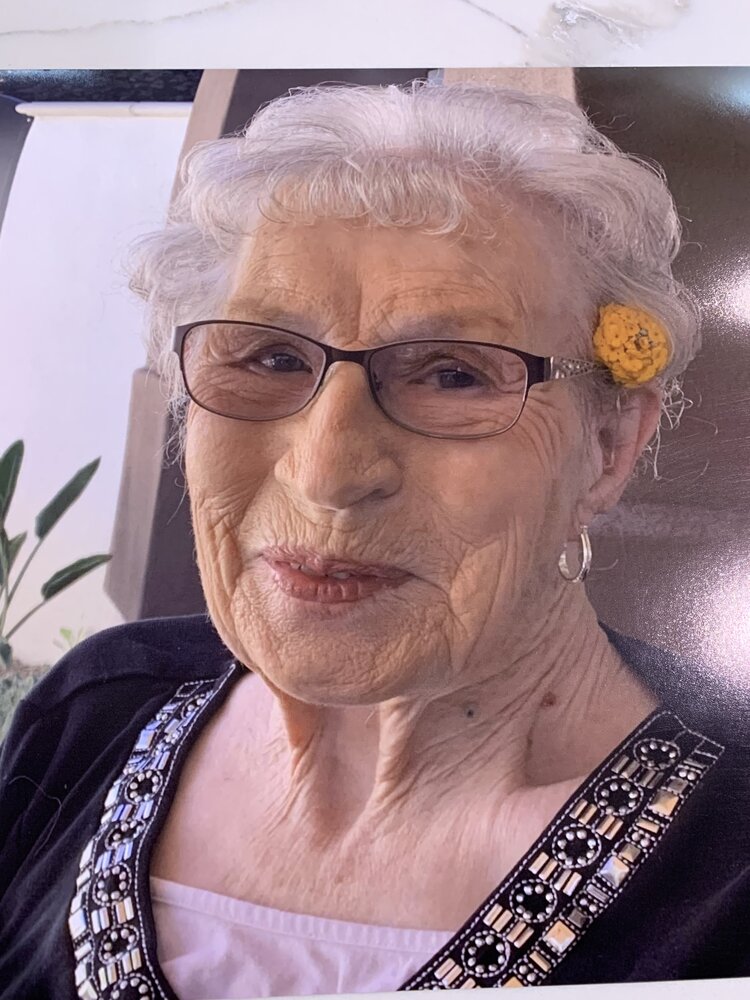 Marilyn died November 20, 2021 in Santa Clarita, CA with her daughter, Mara holding her hand.   She had been under the care of a Vitas Hospice Team for some time and they were so kind and helpful.

Marilyn was born in West Point, Nebraska on April 10, 1932.  She was the oldest of 9 siblings born to Alfonse and Alma Kaup. Marilyn attended Secretarial Training School in Omaha, Nebraska for 8 months before coming to Santa Monica, CA in 1953 with her sister Betty and a friend.  She joined a Catholic Singles group, the Damien Club, where she met her future husband, Eddy Wesel. They married in West Point, Nebraska on June 26, 1954.  They were married for 62 years until Eddy’s death in 2016. They had 3 children, Mark, Mara, and Suzanne.  Suzanne preceded Marilyn in death on November 20, 2004.

Marilyn worked part time in a physician’s office doing the insurance billing while her children were school aged.  Later she worked as the fleet manager at Hughes Aircraft company at the Canoga Park campus.  They lived in their Canoga Park home for more than 40 years and were active in the Our Lady of the Valley Catholic Church and school where their 3 children attended. Marilyn sang in the church choir and assisted in the Sunday school for developmentally challenged adults. They eventually relocated to a brand new house in Simi Valley that Marilyn very much enjoyed decorating and making into their retirement home.

In retirement, Marilyn and Eddy traveled extensively seeing the US, several European Countries, and multiple cruises, including Alaska and the Mexican Caribbean. They purchased a small motorhome and saw much of the United States while camping.

In 2008 Marilyn was diagnosed with Glioblastoma, an aggressive brain cancer.  She underwent surgery followed by radiation and chemo therapy.  Most people her age survive 6-18 months with this diagnosis but Marilyn beat all the odds and lived another 13 years!  She was a true miracle!

In 2013 Marilyn and Eddy moved in with their daughter Mara and son in law Ralph in Santa Clarita.  They required additional care for Eddy’s physical issues and Marilyn’s mental decline.  Nancy Bermudez became their caregiver and part of the family for the next 5 years. Marilyn loved to go out, nearly daily to shop and enjoy her McDonald’s  $1 senior coffee in the afternoon.

In 2019 Marilyn had a spontaneous fracture of her hip. She had this surgically repaired and was doing rehabilitation when 6 weeks later she fractured the other hip in the exact same spot.  She was not able to walk again after this.

Despite the physical and mental challenges brought on by age, Marilyn was such a fighter and lover of life.  The hospice nurse, Barbara that cared for Marilyn told me that she would see Marilyn as her last patient of her day because she was a ray of sunshine and such a special person!

Marilyn is survived by her children Mark (Jana), Mara (Ralph), 4 of her 9 siblings, 6 grandchildren and 12 great grandchildren. She was well loved and will be missed!

Share Your Memory of
Marilyn
Upload Your Memory View All Memories
Be the first to upload a memory!
Share A Memory