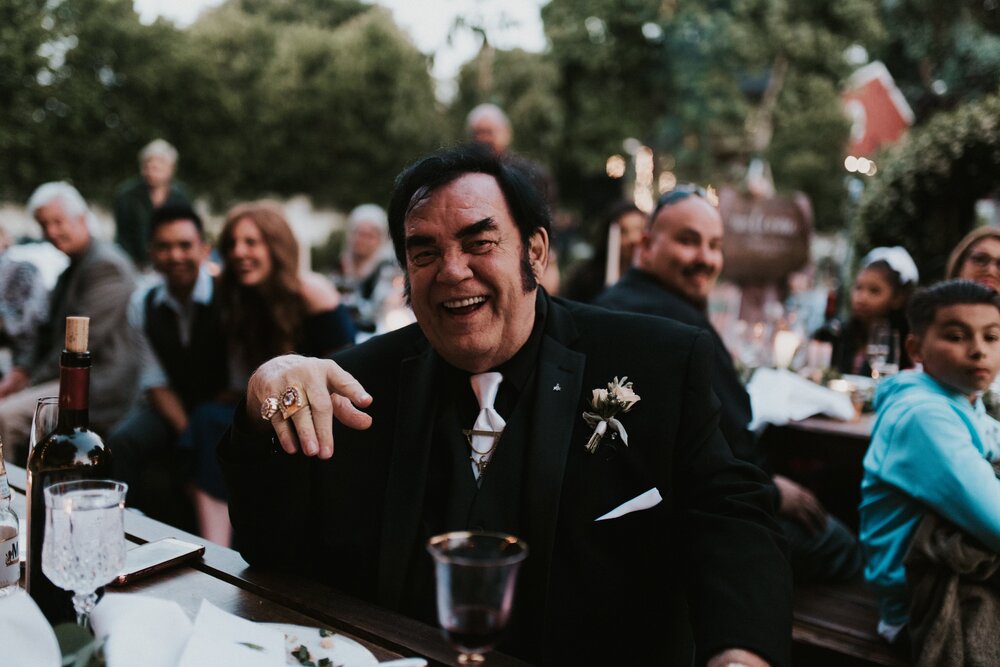 Please share a memory of John to include in a keepsake book for family and friends.
View Tribute Book

John Anthony “Elvis” Foster, 72, of Chatsworth, CA, passed away on July 21st, 2022 in his home.
Funeral service will be held at Freedom Church, 9200 Owensmouth Ave, Chatsworth, CA 91311 on August 8th, 2022 at 10:00am with Pastor Justice Coleman of Freedom Church officiating. Burial will follow at Oakwood Memorial Park, 22601 Lassen St Chatsworth, CA  91311. Viewing / Visitation will be held at Freedom Church on August 8th, at 9:00AM - 9:45AM
Rose Family Memorial will be handling the funeral arrangements. Please join the Foster family at 9:00am for morning refreshments, coffee and continental breakfast before the service to share a hug and your favorite story of John.

Johnny was born in St. Louis MO. to Frank and Dolores Foster on July, 6th, 1950. He went to high school at Pattonville in Maryland Heights, Missouri. He went on to work with his father Franks company “Anthony Window Cleaning” right out of school where they serviced most of downtown St. Louis, including the Arch. They later ran “Anthony Alarm” as a family which he was always so proud of.  Johnny “Elvis” Foster was the first Elvis impersonator with his tribute band “The Johnny Elvis Foster Show: for the Love of Elvis  & the Memphis Sound”.  By the time he was in his 20's he was being booked at places like, the Hilton, Statches Lounge, and Stan Musial and Biggy's. He Toured through East St Louis, Arkansas, Memphis, Georgia and most of the South. He is still the only known Elvis Tribute Artist to have ever met Elvis Presley. A month after Elvis' passing, Johnny got a call from the Dunes Hotel in Las Vegas asking if he would perform in the main showroom 5 nights a week for 16 weeks. When the contract was up Johnny went straight to the Mint Hotel to perform 4 weeks straight. After, Johnny Elvis and his band went on tour over seas. Germany, Paris, Holland and London.
He moved to California in 1983 and started his own Window Cleaning Company following in his fathers footsteps called Anthony Awning and Window cleaning. “Can’t you see? Call Anthony”. He met his soulmate Patricia Balasko, married in 1984 and welcomed their first son in 1985 and daughter in 1987. John and Pat just celebrated 38 years of marriage. John loved being a Husband, Father and Papa to his three grandchildren. He enjoyed Martial Arts, Refereeing, Music, Performing and Honoring Elvis Presley, Traveling, Animals and Acting. He received his black belt in Taekwondo in 1971. John was a history general of the sports karate museum and he just received the Lifetime achievement award in 2019 for 50 years In Martial Arts from The Sports karate Museum. He also just received The Viva Las Vegas Elvis Fan Club Award for being The First Elvis Impersonator in the world from 1961 - 2022. He passed down his karate legacy to his two children and grandchildren who continue to practice to this day.

John is survived by his wife Patricia Foster ,  of Chatsworth CA. His son Blake Foster, his fiancée Katie Needham, his daughter Callie Foster, her husband Leonardo Silva, his three grandchildren Jaxon Anthony Foster, Olivia Ryan Foster and Luca Riley Foster Silva, his brother Frank Foster and his wife Madelyn Foster. He is preceded in death by his Father, Frank Foster and Mother, Dolores Foster.
Memorial donations may be made to GOFUNDME, https://gofund.me/12d5a4df and flowers to Rose Family Funeral Home 4444 Cochran Street, Simi Valley, CA 93063, Phone: 805.581.3800. The family wishes to extend their gratitude to all of John’s friends and family that have helped make this possible for John. It was his final wish to have a proper funeral and to be laid to rest at Oakwood Memorial near his home. It wouldn’t have been achievable without the outpouring of love Johnny has received and we are eternally grateful.